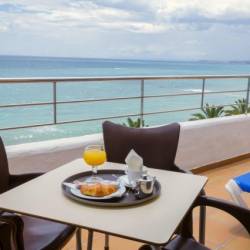 Book here and get the best rate!
From €52
Show offers

The beaches of the Costa del Sol bathed by the Mediterranean, and its more than 325 sunny days a year, are enough reasons for a successful holiday. But if we want to discover more of what surrounds our corner in paradise, and we venture a bit into the interior of Malaga, we will find landscapes of mountains and rural charm, dotted with Roman relics and Arab majesty.

We have selected five villages in the interior of Málaga, which can be reached in less than 90 minutes by car from Puerto Azul, and which stand out for their beauty.

This town of Celtic origin belongs to the region of the Sierra de las Nieves. To discover the Bandolero past of the Costa del Sol and its famous Long Steps, are reasons to visit at any time of the year. You can not miss the Church of the Incarnation (Iglesia de la Encarnación) built on an old Arab mosque and the hypnotic views from the Monument-Viewpoint al Forest Warden (Monumento-Mirador al Guarda Forestal) with pine forests, pines and holm oaks of the Sierra de las Nieves and the headwaters of the River Turón basin as a framework.

Yunquera is a municipality of Roman origin and its name means "reed meadow". The most striking monument is the so-called "Cathedral of the Serrania", the largest temple in the Serranía de las Nieves. Other witnesses of its Roman, Visigothic and Arab past are the hermitage of Our Lady of Porticate (ermita de Nuestra Señora de Porticate) and the Arab Turret (Torrecilla Árabe).

In the heart of the Serrania de Ronda, it is located in the natural area of ​​the Genal Valley. In 2011 Sony Pictures chose this municipality to promote its great premiere that year: The Smurfs 3D and since then the picturesque white houses, including the cemetery, the church and the town hall, were painted in blue. Tourists from all over the world have gone to visit the first "Smurf Village".

Between the coast and the mountain, Gaucín offers excellent tourist services such as hiking, cultural activities, knowledge of craftsmanship or its excellent cuisine. To the south of the region of the Serrania de Ronda its most outstanding monument is the Castle of the Eagle (Castillo del Águila), built by the Romans and later used by the Visigoths and Arabs.

This municipality of the Western Costa del Sol allows to step on the cobbles that were laid centuries ago by Iberians, Phoenicians and Romans. Casares was declared a Historic-Artistic Site. You will be surprised by Casa Natal Blas Infante and Castillo de Casares, of Arabic origin.

How to find us